A guide to Greek Coffee Culture

Discover the secrets of coffee culture in Greece : Greek coffee: According to a 2011 study, Greece, despite its small size, ranked 15th among all countries in the world with an annual per capita consumption of 5.5 kg. This is a daily event that you can enjoy alone while reading the newspaper or busy with your friends in a cafe, in the summer outdoors by the sea, in the winter in pleasant lounges or on a road trip. The coffee hour in Greece is serious and long. Since the best ideas are born behind tables with a few cups of coffee, a few friends or colleagues who have put their thoughts together. When someone wants to invite someone else out, he says, “Would you like to go out with me for a coffee?” Sharing a cup of coffee can be a hobby, get the news of the day. In this article, we are going to provide you with a guide to Greek Coffee Culture. Join us.

Coffee is an important part of Greek culture and it is remarkable, but it is not surprising that Greek cafes are increasing every day instead of giving way to large international chain cafes that have opened in Greece. The country is full of local cafes that can take two forms in Greece. The first form is a cafeteria. A cafeteria is a very popular hangout for Greeks, especially those under 35 years old. During the spring and summer, most cafeterias offer outdoor tables. A cafeteria usually offers a variety of coffees, other beverages and snacks.

Another type of Greek café is the “New Cafe”, an old, traditional café that has existed for decades and is still used by old men in every village or town, though of all people. They are welcomed and treated with love. 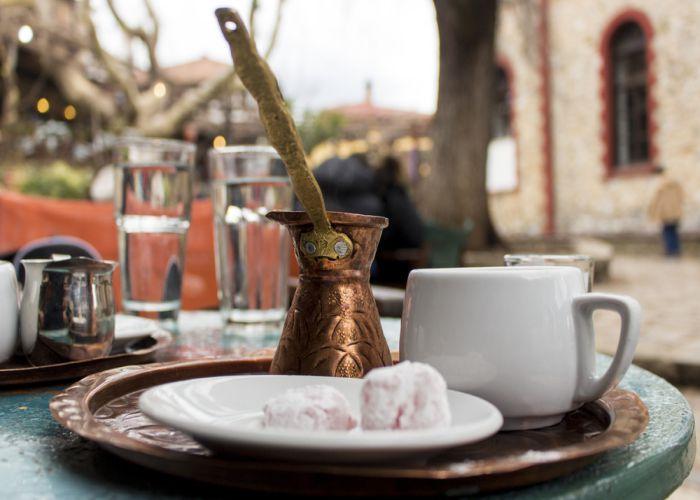 To begin with, traditional Greek coffee, also known as “ellinikós kafés”, is similar in strength to American instant coffee and is actually a version of Turkish coffee that made its way to Greece during the Ottoman occupation. Is. It is a thick, strong and bitter coffee that is prepared in a special small teapot called “briki” and is served with a unique foam on top and coffee particles at the bottom of a small cup. The small size of the cup does not mean that coffee should be drunk at once. Instead, it should be drunk slowly, which is perfectly in line with Greek coffee culture. What remains at the bottom of the cup should not be drunk.

These remnants form sediments that have shaped the Greek prophetic tradition. According to this tradition, after finishing the cup of coffee, you should turn it over so that the coffee grounds cover the entire inside, put a saucer on the cup.

Turn it over and wait for the residue to come out of the cup. Then someone else should look at your cup and look for the shapes that have formed in the cup and then interpret them for you. Another superstition about Greek coffee is related to pouring a little coffee out of the cup, which brings luck and money. Also, if a cup of coffee has a big bubble, some say it means disappointment, while others say it means a good friend will arrive soon. It is thought that a cup of coffee also predicts the weather. If the bubbles gather in the middle of the surface of the cup, the weather will be sunny and beautiful. If the bubbles are on the edges of the cup, the weather will change to rain or snow.

In addition to all these special and cultural features, Greek coffee has something else to offer. Because it is rich in polyphenols and antioxidants and has a moderate caffeine content, it improves cardiovascular health and longevity, according to a study published in the Journal of Vascular Medicine on Ikaria Islanders. In Greece it was done increases, the people of the island are known for their longevity in the world. “Drinking a cup of Greek coffee a day may be the key to longevity for people on the Greek island of Ikaria who live to be 90,” said Dr. Grasimos Siasos of the University of Athens School of Medicine. It is a fact that people who suffer from the side effects of excessive coffee consumption are also advised to drink Greek coffee.

The word frappé comes from the verb frapper, which means “hit” in French. However, when describing drinks, the word frappé refers to its coldness. Nestlé representative Giannis Dritsas was demonstrating a chocolate drink that was instantly made by mixing it with milk and shaking it in a shaker. His employee, Dimitrios Vacondius, could not find hot water to make his usual instant coffee at rest. So he prepared the coffee with cold water and a few pieces of ice in a shaker.

The invention of frappé has since become one of the most popular beverages in Greece. In the 1980s, coffee was number one in Athens and became a stronghold of Greek post-war outdoor coffee culture. It is available in almost all Greek coffee shops today.

How does the balance brewer work?

How to make ice coffee without equipment?

The benefits of adding honey to coffee

Coffee capsules and features of this type of...

What is Decaf coffee? And is it safe?