Brewing Arabic coffee in the traditional way with techniques

Many may think that coffee is a European drink, but the fact is that one of the original origins of a drink called coffee is the Asian Arab tribes. For years, the Arabs kept the method of brewing Arabic coffee like a secret formula among themselves. Arabic coffee gave them energy and helped them endure the harsh conditions of the deserts. In this article, I would like to explain the authentic brewing method of popular Arabic coffee.

Of course, Arabic coffee is brewed in different ways, and in the following you will learn one of the best of these methods.

How to prepare Arabic coffee

An important point about Arabic coffee is that this coffee differs from other coffees such as Turkish coffee and French coffee only in the brewing method, and the name Arabic coffee should not remind you of Arabica coffee beans. We have explained about this type of coffee bean in other articles in Fanjonet. You should know that any coffee powder that is suitable for Turkish coffee will also be suitable for this coffee.

As I said, Arabic coffee is very close to Turkish coffee. So don’t worry about preparing special tools to brew this type of coffee. But Arabs brew it traditionally and in formal ceremonies with a device called dallah. Therefore, if you like to drink Arabic coffee exactly in the way that has been going on for hundreds of years, you can use Dele. But if you are looking for a device that can prepare coffee in both the Turkish and Arabic ways, we recommend Jazoh (the same as our copper coffee maker!). There are different types of pamphlets that you can get from the Fanjonet store.

The way of working and the performance of Dele is similar to that of Jazoh. Both heat the water and coffee powder in a relatively uniform manner and cause the coffee to brew. 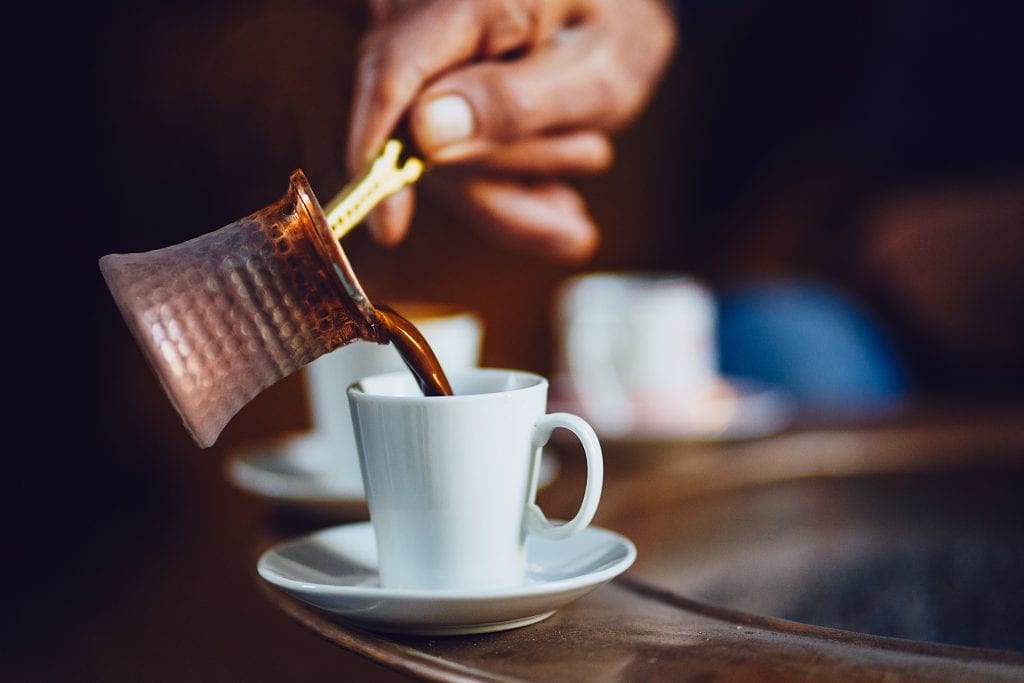 Important note: When you have poured enough water (one cup per person) into the pot or pan, put it on the flame and let it boil on a gentle flame. When the water boils only a couple of drops, remove your pan from the flame for thirty seconds until the temperature of the water is slightly lower than the boiling point. This is the ideal temperature for the first contact of the water with the coffee powder.

Important point 1: Be sure to stir the water and coffee well before putting the hearth or the meat back on the flame. Remember, you must reduce the gas flame well.

Important point 2: As we said, any coffee powder that is suitable for Turkish coffee is also suitable for making Arabic coffee. And of course, we explained that Arabic coffee is not directly related to coffee beans and is a coffee brewing method like France and Turkey, but it is better to know that for an Arabic coffee with a traditional taste, it is better than coffee with a high percentage of Arabica, such as Istanbul coffee, which is Use Fanjunt Store provided.

Important note: Do not let the coffee stay on the flame for more than twelve minutes.

Important point 1: If you let the coffee rest for more than a minute, you will lose the right temperature of the water to release the aroma, color and properties of saffron and cloves.

Important point 2: After adding the spices, put the dal or pamphlet again for a short time on a low flame and let the foam or coffee foam form. After the formation of coffee foam, your Arabic coffee is ready.

Important point 3: Before serving, it is better to leave your dal or jzowa on the side for the coffee powder to settle and then pour it into the cup.

The customs of serving Arabic coffee

Arabic coffee is served in small round cups.

When receiving a guest, after he drinks the coffee, if he shakes his cup, it means he doesn’t want coffee anymore, but if he doesn’t shake it, it means he wants to drink the second cup of coffee.

Another interesting point is serving Arabic coffee for women. When they want to serve coffee to an Arab lady, as a sign of respect, they first bend their left leg and fill her cup with coffee.