There’s also some speculation that coffee might help with weight loss. This is due in part to the fact that, when consumed plain, coffee is a low-calorie beverage, containing just around 5 calories per cup. Here is all you need to know about fast weight loss with coffee diet.

Quick Access hide
Benefits of Coffee Diet
Your body may handle glucose (or sugar) more efficiently.
You have a lower risk of developing Parkinson’s disease.
Your liver will be grateful.
Your DNA will be stronger as a result.
You may be able to lower your chance of developing Alzheimer’s disease.
Why is coffee diet effective in weight loss?
Coffee diet Increases Your Metabolism
It Stifles Your Appetite
How coffee works in weight loss
How to increase the Weight-Loss Power of Coffee?
Are There Any Health Risks Associated With Coffee Consumption?
Bottom Line: Can Coffee Help You Lose Weight?
Rapidfire Ketogenic Fair Trade Instant Keto Coffee Mix

Your body may handle glucose (or sugar) more efficiently.

This is the premise underpinning research that show those who consume more coffee have a lower risk of developing type 2 diabetes.

You have a lower risk of developing Parkinson’s disease.

Caffeine is not only associated with a decreased risk of acquiring Parkinson’s disease, but it may also assist people suffering from the disease better regulate their movements.

Your liver will be grateful.

Both normal and decaf coffee appear to be beneficial to your liver. According to research, coffee drinkers are more likely than non-drinkers to have liver enzyme levels that are within a healthy range.

Your DNA will be stronger as a result.

Dark roast coffee reduces DNA strand breakage, which happens naturally but can lead to cancer or tumours if not repaired by your cells.

You may be able to lower your chance of developing Alzheimer’s disease.

Women account for about two-thirds of Alzheimer’s patients in the United States. The caffeine in two cups of coffee, on the other hand, may offer substantial protection against acquiring the illness. In fact, researchers discovered that women aged 65 and older who consumed two to three cups of coffee each day had a lower risk of developing dementia in general.

Why is coffee diet effective in weight loss?

Caffeine, the major component of coffee, is a stimulant that boosts metabolic thermogenesis, which is the process by which the body creates heat from digested dietary items.

It Stifles Your Appetite

According to the Mayo Clinic, drinking coffee induces a sensation of fullness in some people. This may have an impact on your weight because if you don’t eat extra meals and snacks during the day, you may consume less calories overall. Excess calorie consumption is a key cause of weight gain.

How coffee works in weight loss

It is linked to a loss of body fat. A recent research indicated that persons who drank 250 millilitres (ml) of coffee (approximately 1 cup) three times per day lost body fat during a four-week period. Another research, published in the American Journal of Clinical Nutrition in December 2019, discovered that consuming four cups of coffee per day resulted in a 4% decrease in body fat over a 24-week period, most likely due to coffee’s capacity to promote metabolism. However, three to four cups of coffee may be more java than you normally consume. 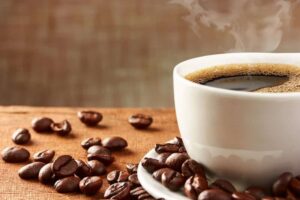 How to increase the Weight-Loss Power of Coffee?

However, if you’re not careful, your cup of coffee may easily veer into harmful area. If you add sweets, milk, and other high-calorie components, you may end up with a drink with 300 to 500 calories. If weight loss is the aim, black coffee is definitely recommended, although some additions may be acceptable.

Are There Any Health Risks Associated With Coffee Consumption?

Before you start guzzling coffee all day, remember that while there is some scientific evidence to support coffee’s influence on your waistline, you don’t want to go too far. According to study, even if you consume coffee up to six hours before bed, it might cause sleep problems. According to the Mayo Clinic, lack of sleep increases hunger and appetite through affecting the hormones ghrelin, which impacts hunger, and leptin, which promotes feelings of fullness.

There is some evidence that coffee can boost your metabolism, increase fat burning, and help you feel fuller, but don’t anticipate miracles. Coffee’s weight reduction advantages, according to Boyer, are minor, and additional human research are needed before convincing proof is achieved.

Keto Coffee Mix with hazelnuts, premium. KETO & PALEO FRIENDLY. Made with great-tasting Green Mountain Coffee, Grass Fed Butter, MCTs from coconut oil, and a hint of Himalayan salt for a delightful, healthy, fat-burning, and low-carb coffee with powerful taste. Rich in MCTs and beneficial fatty acids to help the body produce ketones, which promotes enhanced metabolism, weight reduction, and cognitive function. There are no gluten, soy, or artificial substances. 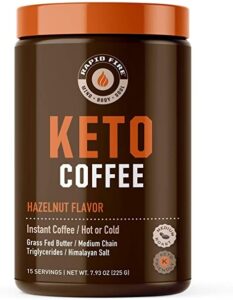 Eight ways to use coffee on the skin,...