In this article we are going to The steps of coffee beans drying! Introduce. Stay with us. In the past, dried coffee fruits were peeled with a hull, but today this is done with the help of calibrated machines with very high precision.

Dry processing is very common in countries such as Ethiopia, Yemen, Brazil and Costa Rica; But coffee makers in other countries are also experimenting.

Coffee that has been harvested by stripping or mechanics (ie, non-selective harvesting methods) is sometimes processed naturally. In this case, a combination of unripe, ripe, overripe or semi-ripe fruits with foliage, soil and stone enters the processing station. Before drying the seeds in natural processing, the coffee cherries are sometimes sorted according to their moisture content and each batch is dried separately so that it dries evenly. If the coffee cherries are not cleaned and sorted before drying, the quality of the product will decline.

The flow of air can separate the light impurities such as leaves, stems and soil from coffee. In the past, this winnowing was done manually with large sieves, but today industrial devices are used that either suck up impurities or expel them by blowing air. In another stage of cleaning, known as sifting, heavier foreign materials such as sand, rock, and pebbles, which are slightly smaller or larger than coffee coffee cherries, are separated using two lattice and vibrating plates. There are machines that perform both the winnowing and sifting steps simultaneously.

Flotation method is used to separate stones and coffee cherries with different moisture content. Different systems are used at this stage, but the common principle in all of them is the density difference between sinkers and floaters.

Sinkers: Ripe and immature coffee cherries that are denser and settle. 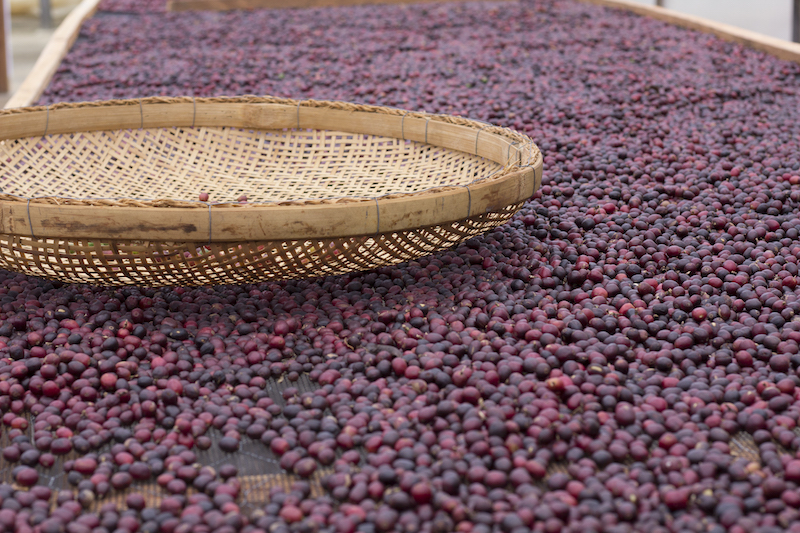 After cleaning the coffee cherries, they are spread in direct sunlight, on the patio, on high boards or mats so that the height of the coffee cherries on top of each other is not more than 5 cm. The goal is to increase the moisture content of fruits from 60% to about 11% to 12%. The seeds are turned upside down every 30 to 40 minutes to dry evenly. Workers separate defective coffee cherries (such as immature and immature seeds) from the seeds before they have dried and are the same color as the rest of the ripe fruit. The drying phase lasts between 10 days and 3 weeks.

Once the coffee cherries are dry, it is time to peel (Hulling or Husking). At this stage, the skin, pulp, mucilage and parchment are separated from the grain by the device and green coffee with a silver shell is obtained. Sometimes this silver crust is removed from the grain and sometimes it is left to separate during roasting. The peeled bark is either used as fertilizer for coffee trees or made into a brew (Cascara).